Mummy.
Yes, a mummy!
For almost thirty years she had thought of herself as a mummy. Nothing more than a mummy! People around her however; saw her as a beautiful woman. At least in Kebon Sari, a filthy slum neighborhood in Jakarta, she was the finest and most beautiful woman around.

Kebon Sari was the final waste disposal site, where all types of garbage were dumped. There were rotten fish heads, meats, fruits and vegetables; and leftover food from houses and restaurants; dead rats, cats and dogs; human filth and moldy papers. All secreted bad odors. Amongst its mountains of garbage, roughly 57 families of the ‘wong cilik’ lower class community, lived by erecting huts made of cardboards, corrugated iron, triplex and packing boxboards

During the rainy season, the foul odors became even more offensive. Such an odor would have killed off any upper class people had they been stranded there. Their inability to endure the super foul odor would have made their stomachs nauseous until their vomit filled their strangled throats and their mouths became bitter with bile.

Strangely, since Kebon Sari had become a waste disposal site in the mid 70s, there had not been a single wong cilik living there who had died from the foul odors. True, there had been deaths, generally among the men as a result of physical violence and several deaths of forced abortion among the women. Surprisingly however, the mortality rate for children under the age of five was nil. Despite the rampant growth of worms in their stomachs and their inferior physiques compared to children from wealthy districts, they survived. Their peals of laughter never failed to enliven Kebon Sari. It cheered up the hearts of those who lived there, including she, who called herself a mummy.

“Bu Ambri!” that was how the people of Kebon Sari called her, for she was sweetly fragrant and was knowledgeable in making and producing ‘ambri ‘perfume. Ever since she lived in Kebon Sari she had produced ambri for her neighbors consumption. Ambri was a status symbol in Kebon Sari, where nice smelling dwellings were seen as having class, money, and respected. Consequently, they splurged on ambri and she was never short of buyers. She even ran out of stock sometimes as she worked moderately and was not obsessed in money, also the savage monetary crisis that started in July 1997 had reduced her production to only 60% of her normal rate. For 25 years she had produced two liters of ambri per month until the monetary crisis increased the price of raw materials by 300%. She produced four fragrances: rose, jasmine, telon and eucalyptus.

Bu Ambri was petite, her skin was fair and smooth, her face was oval with a pair of clear eyes and small moist lips. As she entered her fifties, her hair was still luxuriantly black, and she looked elegant despite her patched dress.

“Mamak, if we watch closely, Bu Ambri looks like Widyawati, right Mak”’ Denok commented that night, while she helped her mother to sort out the pile of papers delivered by Pak Karso, one of the ‘gendulan’ trash collector who also lived in Kebon Sari.

“Widyawati who, Nok?” responded Mirah who is known as a paper boss in her area. She was also one of the first people who lived In Kebon Sari, along with her husband, Kang Setro, who was now thought of as ‘lurah’ village head by the people in Kebon Sari.

“Ah, mamak! Why ask who is Widyawati, ya Widyawati, the beautiful film star,” Denok emphasized.
“O….” Mirah laughed, “Yes, you are right. Bu Ambri is good looking like Widyawati if she’s dressed up…”
“Ah, even not dressed up she is already beautiful. It’s a pity she’s mute!” Denok commented again. “Hush! Be good. Don’t talk like that! Bu Ambri’s not mute. She is like that; she talked a little, but worked a lot. She did the people here a big service.”
“Because she’s smart in making perfume for the people here?” cut Denok.

“Not only that. She had taught reading and writing to the people here, including to your brothers and myself. So now we can read the newspaper and magazine. And I can assist your farther in trading; making notes of money, reading bills, and so we don’t get conned. I’m very happy.” Mirah said proudly. “Bu Ambri also recommends that the children here go to school. That’s why your father wanted you to continue your schooling until high…”

“Until high?” Denok cried, her eyes opened wide, “Only going to ‘SMP’ junior high, is already thought as high…” “SMP? SMP is already high Nok, argued Mirah, “your friends here only up to primary school. Even your older brothers didn’t go to school.” “But I want to continue to ‘SMA’ senior high, and then…” “Then get married. Sudiro already proposed for you many times,” Mirah said firmly as she tossed her white hair.

“Marry? Mad,” Denok cried crossly, “Mamak, you always tells me to marry, marry, marry! Yet in front of people, like Bu Amri, you said you want to put me until university. Now people think I’m the one who wants to get married. That’s why Bu Amri became distant and reluctant to talk to me. You know that she doesn’t like girls who want to marry quickly. She prefers girls who likes to learn.”

“Ah, who said so? Bu Ambri is not like that. She treated every one fairly. She has a good heart.” Mirah said enthusiastically. “That’s only your feelings”.

“Ya, Nok, only your feelings. Bu Ambri is not like you think,” suddenly a man’s voice came from outside, then entered the house, and joined Denok and Mirah. He was Kang Setro.

“E, Kang! Already back,” Mirah greeted her husband happily. “Denok and I were talking about Bu Ambri,” she continued.

“Ya, I heard,” answered Kang Setro, “That’s why I said to Denok not to think bad about Bu Ambri. She is a good person with a high education. Many people here learned from her,” Kang Setro looked at his daughter. He then continued, “It’s even possible that she is ‘ndoro’ a person of nobility. Just look how graciously mannered she is. She speaks excellent Indonesian, just like a TV presenter. The people here, including myself, speak good Indonesian by copying Bu Ambri….”

“Not only her speech is smooth, her skin is so smooth too. Soft, very clean and always fragrant…” added Mirah in awe.

“But why does Bu Ambri wants to live in a smelly place like this, Pak?” asked Denok puzzled.

She had had that question for a long time. Ever since Denok began to understand the value of beauty and the benefits of perfume for a woman.

“Yes, I think the people here don’t know the exact story of Bu Ambri. What is her real name no one knows. Even Bu Ambri herself never revealed her name. She didn’t mind to be called by what ever name.”

“Strange,” Denok shook her head, “Mak, Pak, I want to hear the story of Bu Ambri!” she continued impatiently. 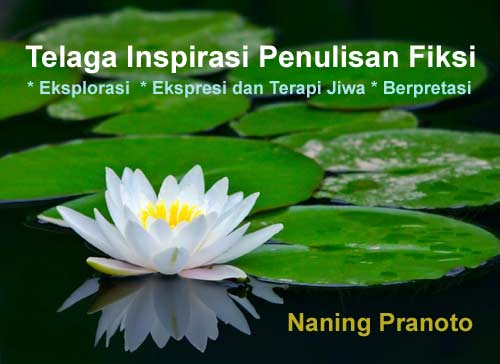 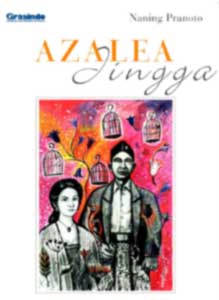